What is NVIDIA Tesla Volta? The most advanced data centre GPU ever

Imagine a processor that offers advanced design capabilities for entertainment and commerce, while enabling scientists to tackle the world's most challenging problems from climate research to quantum physics. The GPU makes all of this possible.

GPU computing is the use of a GPU (graphics processing unit) together with a CPU to accelerate general-purpose scientific and engineering applications. Introduced by NVIDIA, GPU computing has quickly become an industry standard, enjoyed by millions of users worldwide and adopted by virtually all computing vendors.

GPU computing offers unprecedented application performance by offloading compute-intensive portions of the application to the GPU, while the remainder of the code still runs on the CPU. From a user's perspective, applications simply run significantly faster.

A simple way to understand the difference between a CPU and GPU is to compare how they process tasks. A CPU consists of a few cores that are optimised for sequential serial processing, whereas a GPU consists of thousands of smaller, more efficient cores designed for handling multiple tasks simultaneously.

From scientific discovery to artificial intelligence, high performance computing (HPC) is an important pillar that fuels the progress of humanity. Modern HPC datacentres are currently solving some of the greatest challenges facing the world today. With traditional CPUs no longer delivering the performance gains they used to, the path forward for HPC datacentres is GPU accelerated computing.

NVIDIA® Tesla® V100 is the world’s most advanced data center GPU ever built to accelerate AI, HPC, and Graphics. Powered by the latest GPU architecture, NVIDIA Volta™, Tesla V100 offers the performance of 100 CPUs in a single GPU—enabling data scientists, researchers, and engineers to tackle challenges that were once impossible. 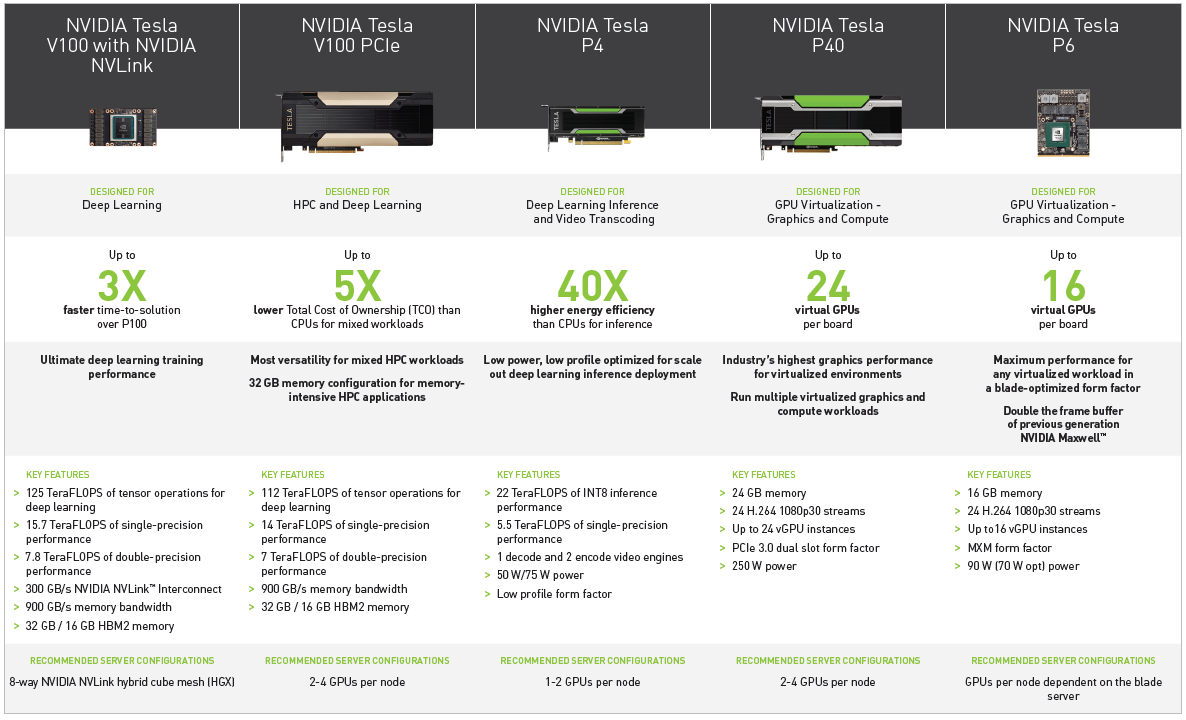